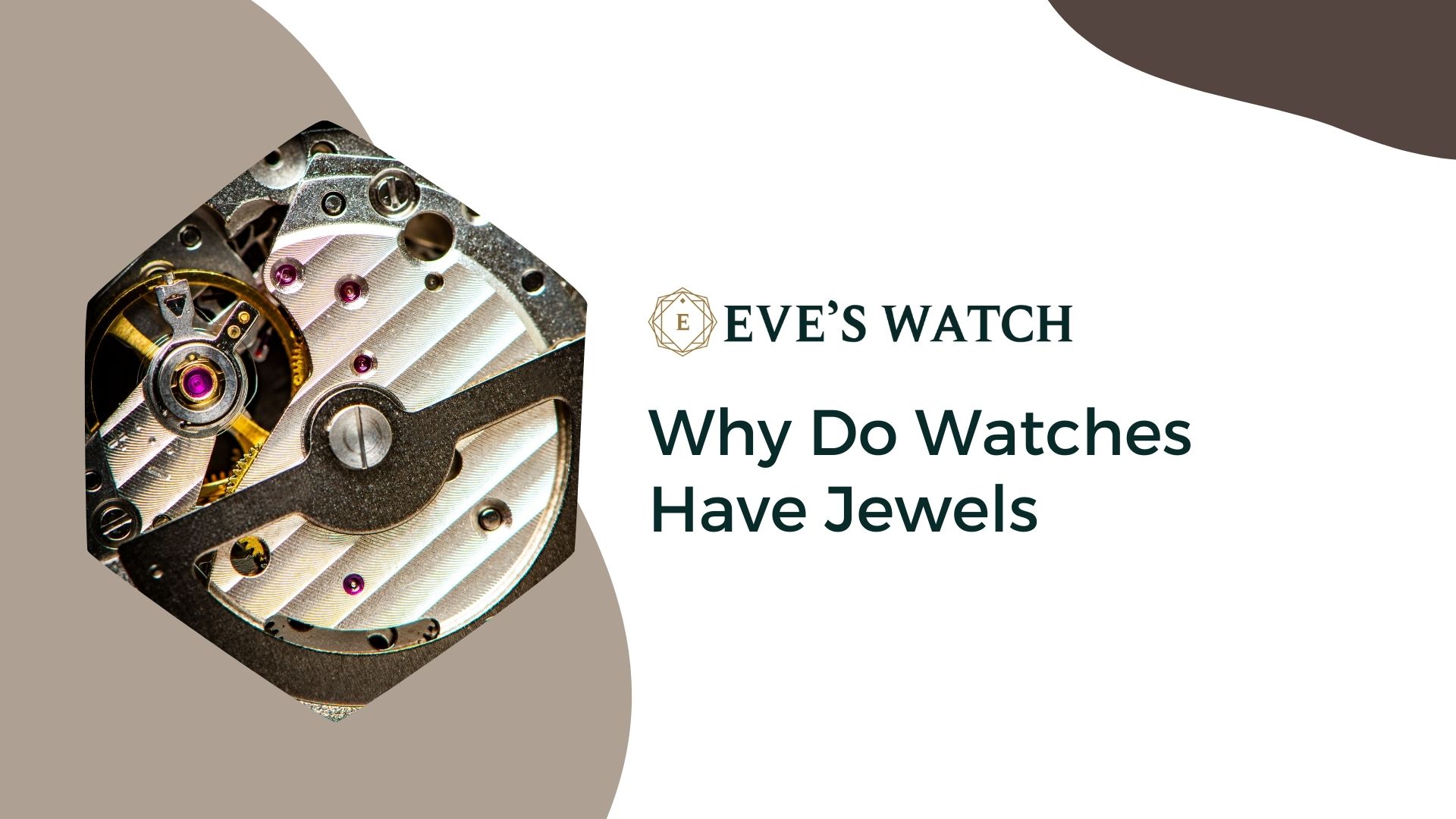 Watch jewels or jewel bearings are small pieces of synthetic sapphire or ruby set into holes within a movement. You can either find them in the gear train or pivot points of watches, but some timepieces are designed with jewels in their anti-shock mechanism.

These jewels are useful, yet having too many jewels may work to the detriment of the timepiece’s moving parts. And the difference in the number of jewels from one timepiece to another depends on the complication in their moving parts.

But have you ever wondered what their purpose is in a watch? Do watches need jewels to function?

We, at EvesWatch.com, highlighted the top reasons why watches have jewels. By the end of this article, you will also know the types of jewel bearing and the approximate number of jewels in a good watch.

To better appreciate the roles of jewel bearings in a watch, let’s first know…

A Bit of History About Watch Jewels

Before watch jewels were invented, watch bearings and metal pivots rubbing against each other were a major concern among watchmakers. This led to severe damages in watch movements, especially as the oil dries up and evaporates over time.

This problem was solved at the start of the 18th century when Swiss astronomer and mathematician Nicolas Fatio de Duillier invented a technique of drilling gemstones (sapphires or rubies) to use as bearings in watchmaking.

Over the years, watchmakers have associated jewels and their numbers in a watch with high-grade timepieces. Then, in 1902, French chemist Pierre Victor Louis de Verneuil invented the “flame fusion” process (or Verneuil Process) that allowed the production of artificial corundum (rubies or sapphire).

His invention enabled the manufacturing of large quantities of artificial stones. This consequently made jewel bearings more affordable. This is how automatic watches, like Aigai, Creon, Nikos, and Olyn contain 25 jewels each and remain collectible and accessible.

Why Do Watches Have Jewels?

Most wristwatches are intricately designed. They are powered by energy – whether that would be kinetic, solar, or electrical energy – stored by winding the spring. Such makes it important for watches to retain as much energy as possible to function.

Naturally, this means that friction should be avoided and that’s what jewels are designed to do. The jewels in a watch are primarily used to reduce friction, thus allowing metal components to rotate freely and not jam.

They Are Used for Accuracy

As the energy lost in friction is decreased, the slight discrepancies applied to the balance spring can likewise be minimized. This creates a noticeable difference in timekeeping accuracy.

To Give a Longer Life to the Watch

Watch jewels reduce watch components from damage as a result of long-term continuous friction. These synthetic rubies or sapphire are harder than metal and can absorb damage as oil breaks down.

In fact, not only are jewels used at the points of impact (like the pallet fork) but also at the points of rotation. To ensure accurate fit and shape, jewels are shaped using advanced technologies, like lasering, milling, and chemical etching. All these help increase the life of not just the jewel bearings but the watch as a whole.

Jewels are also used in a watch to support the watch components. As you know, friction caused without jewel bearings could offset the time by a few minutes or seconds and this affects timekeeping. Now, modern watches use jewels in watches to increase the precision of a watch.

Jewel bearings’ role in shock absorption improves the durability and functionality of the watch. Particularly, they are placed in several parts of the watch movements to function as friction-reducing agents and shock absorbers. All these increase the longevity of the timepiece.

In some watches, the jewels are spring-mounted so they can absorb the shock more easily. The jewel’s hardness likewise offers a place for gears to work correctly without incurring damage and for pivots to be attached.

Are More Jewels in a Watch Better?

No, more jewels in a watch don’t equate to better watch quality. Some mechanical watches may utilize 21 to 27 jewels only to reduce positional errors within the timepiece. A higher number of complications in automatic watches require more jewels too.

As to whether rubies or sapphires are better for creating a watch bearing than emeralds, we can’t tell exactly because it boils down to their purpose. Generally speaking, though, ruby is the most preferred watch bearing.

When are jewels in a watch superfluous?

We’ve mentioned earlier that having too many jewel bearings in a watch may not be an optimal choice. They are not necessary to be placed in every movement component. Also, jewel bearings need a certain amount of “play” or looseness so that the gear shafts can tilt slightly.

An example when jewels are superfluous is in the case of automatic watches with rotor bearings. Exceptions would be if the rotor is surrounded by small ball bearings, which have quicker movement impulse. The large diameter of the ball bearing moreover protects the rotor from hitting or tilting against the rest of the movement.

There are different types of bearings used within a mechanical watch movement. They are the following:

A hole jewel – also called the pierced jewel – is used for the majority of the standard gear train wheels as they are press-fit into prefabricated holes.

Hole jewels are sleeve-like jewel bearings that feature a circular, single concave jewel but with a precise hole for the arbor or gear shaft to slot within. There’s also some oil found around the hole for lubrication. The jewel’s overall shape looks like a doughnut.

Cap Jewels (have no holes)

Some watches use cap jewels also referred to as capstones. This type of bearing structure operates like a hole jewel but has a second outer jewel sitting at the tip of the gear shaft. The way it is positioned in a watch has several effects.

First, it helps form a small oil reservoir between the two jewel layers to ensure continuous lubrication for the fastest-moving watch parts, like the balance wheel.

Second, it allows the gear shaft to be formed in a conical shape, preventing the oil from dripping down the arbor. It also prevents the gear shaft from moving up and down during rotation.

Cap jewels often have a type of shock protection, like a spring, at each end.

Pallet jewels are usually rectangularly-shaped watch jewels used at the end of each arm on the component of the lever escapement.

A roller jewel uses a connection point between the pallets and the escape wheel. This type of jewel sits inside the pallet fork.

Jewels are often used in these areas on a watch:

Are jewels in a watch valuable?

Some customers believe that the higher the jewel count in a watch means the higher its value since the jewel bearings are made up of precious stones. However, these jewels are economically not that valuable.

In old watches, natural jewels, such as sapphire, diamond, ruby, and garnet were used. Today, most jewel bearings used are only synthetic sapphire or ruby called corundum, meaning they are artificially grown from laboratories. Their purpose is only for the proper functioning of the watch because of their anti-friction properties.

There’s no difference in performance between sapphire and ruby jewels in modern watches since they are fundamentally the same Al2O3 Corundum mineral and with the same properties.

How much does a watch jewel cost?

Jewels in watches are made of rubies. They are synthetic to be used for bearings and they cost around $5 to $20 per jewel.

How many jewels can a watch have?

Watches that have no complications – no extra functionality other than telling time to have about 15 to 17 jewels. Such a number of jewels in a watch is the most common type among mechanical watches these days.

On the other hand, watches with complications – has additional features, like displaying another time zone or date – can have about 21 to 26 jewels.  The world’s most complicated timepiece has  242 jewels in its movement and it’s the Vacheron Constantin Reference 57260 mechanical pocket watch.

A 17 jewel watch is considered to be fully jeweled. This is a standard among watches without complications. Being a fully jeweled watch also means that there are bearings in the mechanical movement from the center wheel pivot to the balance wheel.

To better appreciate the 21 jewels in a watch, let’s analyze the Seiko 7S26. It is one of the most popular watch models from Seiko. This timepiece has a calendar complication that needed more jewels.

Do quartz watches have jewels?

Yes, but not all. Quartz watches are known for being battery-powered so they don’t normally need jewels to function.

Still, there are expensive quartz watches with a couple of jewels in them. Manufacturers of these watches make sure that the owner or wearer of the said watch still gets the smoothest possible experience.

The gears in cheaper quartz watches are often made from plastic materials so the friction is not much of a problem. That’s not the case for their more expensive counterparts that have steel materials in them. As a result, quartz timepieces with jewel bearings in them last longer.

A jeweled quartz watch can have between five to ten jewels, depending on the number of complications and on the manufacturer. Chronograph timepieces, for instance, feature more jewels because they have faster-moving parts.

Do jewels determine a watch’s value?

There is no direct proportionality between the quality of the watch and the number of jewels. If a watch has more features, like dual-zone, extra power, or moon phases, each of these functions requires more jewels.

Does Rolex use real jewels?

No, Rolex uses synthetic rubies as their jewel bearings to keep the watch components friction-free.

There is no standard number of jewels in a Rolex watch. Most Rolex watches have about 20 to 40 jewels, but some Rolex models with additional movements and complications include even more than 70 jewels.

The Bottom line: Jewel Bearings are Crucial in a Watch!

You’ve made it to the end! What you need to take away from this discussion is that jewel bearings are crucial in watch movements and are often placed at important wear and friction points.

Not only are the jewel bearings used for combating wear and friction, but they also improve the durability and functionality of the watch.  So, the next time you buy a watch, we hope this information can help you understand watch specifications better.

Want to learn more about watches? Check out our other guides and reviews at EvesWatch.com.