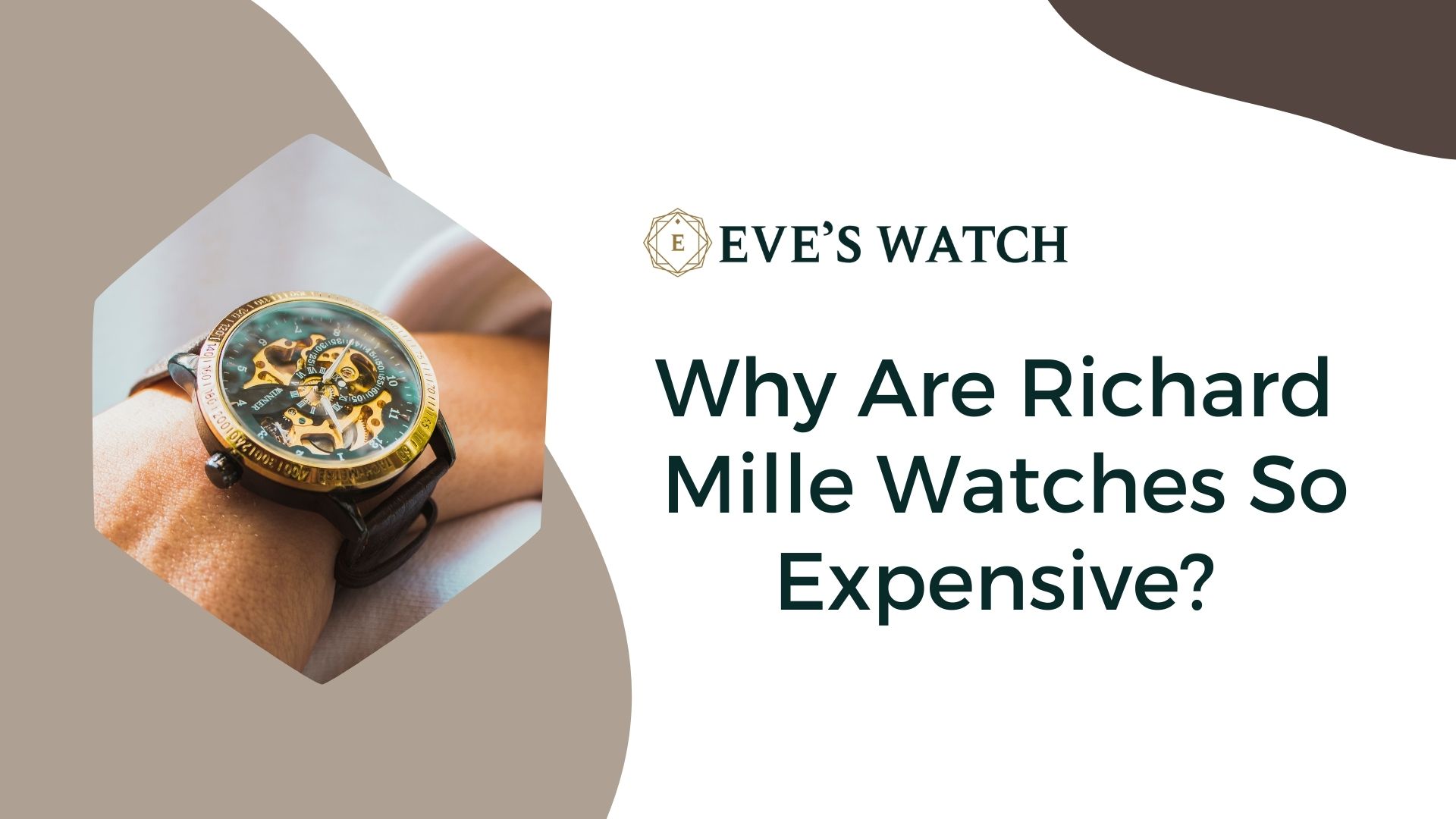 Time is the most valuable asset of a person’s life. Therefore, we need a timepiece because we encounter so many things and experience them.

Although everyone has smartphones now, which tell even more accurate times than most watches, still people like to wear watches. People feel confident, elegant, and responsible for wearing watches.

What is a watch telling you the time? It’s essential for people who like watches more than just a timepiece. It adds value to your confidence level and makes people look twice at your watch.

Some watches are good quality and affordable, but some cost a fortune. These kinds of timepieces are known as luxury watches. When you talk about luxury and costly watches, the Richard Mille brand comes along with Rolex and Patek Philippe.

It’s been just a couple of decades since Richard Mille entered the watchmaking industry. However, it has owned its name due to its expertise, ingenuity, and eccentricity.

Richard Mille is the most exclusive brand now, and watches start from USD 80,000 up to several million dollars. Well, that’s too much.

After knowing its price range, you must think about why Richard Mille watches are so expensive? Well, let’s find the answer to your question.

History of the Richard Mille Brand

Richard Mille is the man behind this brand. Richard Mille began his career in the watch industry in the 1970s with a French company name Finhor.

In 1981, it was bought by Matra. This was when Richard Mille’s career took off, and he started excelling through rank, ultimately operating the whole watchmaking process.

Mille then left Matra after a decade and started making watches for Mauboussin, a jewelry firm new to the watchmaking industry. Mille ultimately took the plunge and launched his label at the end of the 1990s. The brand continues to amaze us, and people adore Richard Mille.

The concept behind the Richard Mille brand was to bring watchmaking into the 21st century. Mille’s incredible technical competency and progressive attitude made his dream come true. He started his brand by working with Audemars Piguet.

Audemars Piguet was a famous watchmaker, and they released their first Richard Mille watch, the RM001, almost in 2001. RM001 was a tourbillon watch whose design was unique and appealing to everyone.

Even if the designs are unique, does it cost this much? Let’s find out.

Why Are Richard Mille Watches So Expensive?

Several factors will explain the reason behind the expensiveness of Richard Mille products.

Richard Mille watches have a one-of-a-kind design that you won’t find anywhere else. The unique style says a lot about the boldness of the watch, and it can be recognized from afar. Richard Mille even stated that he intended people to say “wow” when they saw his timepieces.

Richard Mille and his partner based the design of watches on sports cars. Wearing a Richard Mille watch has been compared to wearing a sports car on your wrist, which makes sense given that it costs nearly the same as a luxury sports car.

The watch’s engineering and mechanics are combined in the design. It does, however, have a sleek and modern appearance. The watch’s gears are arranged in intricate designs that exude coolness.

Everything has been considered in the design to maximize its comfort and attractiveness. It is all handcrafted and highly technical. The dial itself, or the lack thereof, is incredibly complicated.

Richard Mille watches are also known for their skeletonized dials, which incorporate a sophisticated layering of sapphire crystals and other materials for optimal visibility into their complex movements.

Overall, handcrafted watchmaking of this caliber is incredibly time-consuming and requires a high level of technical competence, which is one of the reasons Richard Mille watches cost high.

Beyond the outstanding mechanics and dizzying displays of Richard Mille, the casings are possibly the most fascinating feature of these watches designs. Mille’s cases have long been a topic of discussion.

The classic tonneau design may appear out of place for such a trendy brand, but its concept is quite different from the traditional style that inspired it.

The sandwich-style watch casing is incredibly expensive and difficult to make. Each component is curved and consists of three decks: front and back bezels and a central part. Because there are no flat surfaces, machining is complicated.

Furthermore, the curved surfaces fit together within a hundredth of a millimeter to seal off moisture and dust entirely. It should particularly impress anyone who knows anything about machining.

Furthermore, Richard Mille watches are made of various materials, including titanium, gold, carbon composite, Carbon and Quartz TPT, and sapphire. The casings are bent to increase the watch’s ergonomics and these somewhat “out there” materials.

This implies that the watches don’t only look future; they also fit futuristically, with huge diameters and terrifying heights hugging the wrist as close as possible. The tonneau-shaped casings set it apart from other watches and contributed to developing a distinct style that watches lovers readily recognize.

It takes a long time to make a fantastic casing. Just one sample takes roughly 960 hours to create. It’s no surprise that they cost between five to seven figures each because they take so long to make.

The dial-less display is one of Richard Mille brand’s most distinctive features. While his watches aren’t skeletonized in the classic sense, their ambitious bridges create a collection defined by cohesion.

Although the shape, size, case material, and even color may help you recognize a Richard Mille watch across a room, the dial will leave no question.

Before a product leaves the factory, Richard Mille spends a lot of time and work creating a precise degree of quality.

Each watch goes through around 50 processes designed by the company to verify that it meets the brand’s high requirements. These quality control measures are known as the International Organization.

Due to stringent criteria, at least 30 to 40% of components are rejected during the production process. While this guarantees all items function as intended, a lot of waste costs the organization a lot of money.

Richard Mille’s watches come in various colors, never afraid to break the ice. Some luxury timepieces are only available in black and gray or silver. On the other hand, other Richard Mille watches have orange, vivid red, blue, and pink colors.

People can use these hues to convey their bold personalities smartly. The colors also never clash because everything goes with a sports car, regardless of the color scheme.

The lightweight build of a Richard Mille brand watch makes it appear fantastic and makes it feel terrific. Due to their robust appearance, these timepieces’ lightweight and soft feel may appear deceptive.

Richard Mille brand collaborated with some of the most prominent names in lightweight material science to ensure that their watches stood out from the crowd. Most luxury watches, especially those that incorporated hefty technology, were cumbersome before these improvements.

Richard Mille also experimented with innovative materials to create lightweight watches. The RM 002 Tourbillon has an unusual “titanium movement base plate coupled with a torque and function indicator.” A carbon nanofiber base plate was then utilized in later generations.

Furthermore, Richard Mille’s watches are made from materials that are rarely, if ever, used in the watchmaking industry. These materials include gold fused with carbon and quartz, silicon nitride, and other materials found only in the aviation and racing industries.

The use of these materials is why Richard Mille’s brand watches are so expensive.

The force of gravity is one factor that can alter even the most complex watch designs. Tourbillon technology moves the watch slightly differently, thus avoiding gravity’s influence and assuring the most precise timekeeping.

The fundamental distinction between watches with tourbillon technology and those without is the location of the escapement. Most watches have it corrected. On the other hand, Tourbillon watches the escapement in a spinning cage.

Richard Mille watches are shock-resistant, making them more comfortable for people who like to do outdoor activities and are involved in sports. It is designed to match the sports car-like formula one, so this is a quality it must have.

Bubba Watson’s watch, on the other hand, must resist the g-force generated by his swing.

People purchase a Richard Mille watch to demonstrate their wealth. It’s a status symbol that communicates your place to others. Richard Mille made sure that they offer Luxury watches by using the best and most high-quality materials.

The brand built elegance into the business plan from the start. When people viewed the watch, Richard Mille intended them to think of luxury. It took a long time and a lot of money to establish the name as a luxury brand.

Anyone familiar with watches will recognize a Richard Mille timepiece. They also know that the owner paid a substantial sum for it. Many individuals prefer Richard Mille watches to other expensive watches because of their particular look.

Even after the warranty period, the watch retains a significant percentage of its value. Most people discover that their investment pays off in the long run. Because of the great return on investment, you can buy the watch with a bit less shame, knowing that you can resell it if the need arises.

To ensure this much durability makes Richard Mille watches costly, contributing to its exclusive prices.

There’s no denying that Richard Mille watches are stylish. His clientele includes true watch enthusiasts and a few celebrities like Jay-Z, Drake, and Nick Jonas. One collector owns each of Richard Mille’s watches.

When a celebrity endorses a product, it brings that into the limelight and builds an excellent reputation.

You can only find Richard Mille watches on the wrists of society’s upper crust. It has been considered the ultimate statement of riches in the watch industry. The term “Billionaire’s Handshake” was created for people who wear Mille’s.

While the timepieces themselves are stunning in design, engineering, and invention, Richard Mille’s marketing is genius. It is, without a doubt, the primary reason for their exorbitant prices.

They’ve done an excellent job at conveying a strong sense of exclusivity. If you own a Richard Mille, you know that only people like you can afford one.

Along with Patek Philippe, it has become the ultimate status symbol in the watch industry. Even more so because everyone knows you spent a fortune on a Richard Mille and that only the wealthiest and most recognized celebrities wear them.

The following are some of its luxury watch collections:

Richard Mille serves as a unique, durable watch and not just a beautiful bracelet. Like other hand-made things, hand-made watches are insanely expensive, but they are worth buying for people who can afford them.

Innovative materials and quality control standards also contribute to its high cost. Moreover, it has become a brand image intended to serve a specific group of people.

If you want to learn more about different watch brands, visit Eveswatch.com.