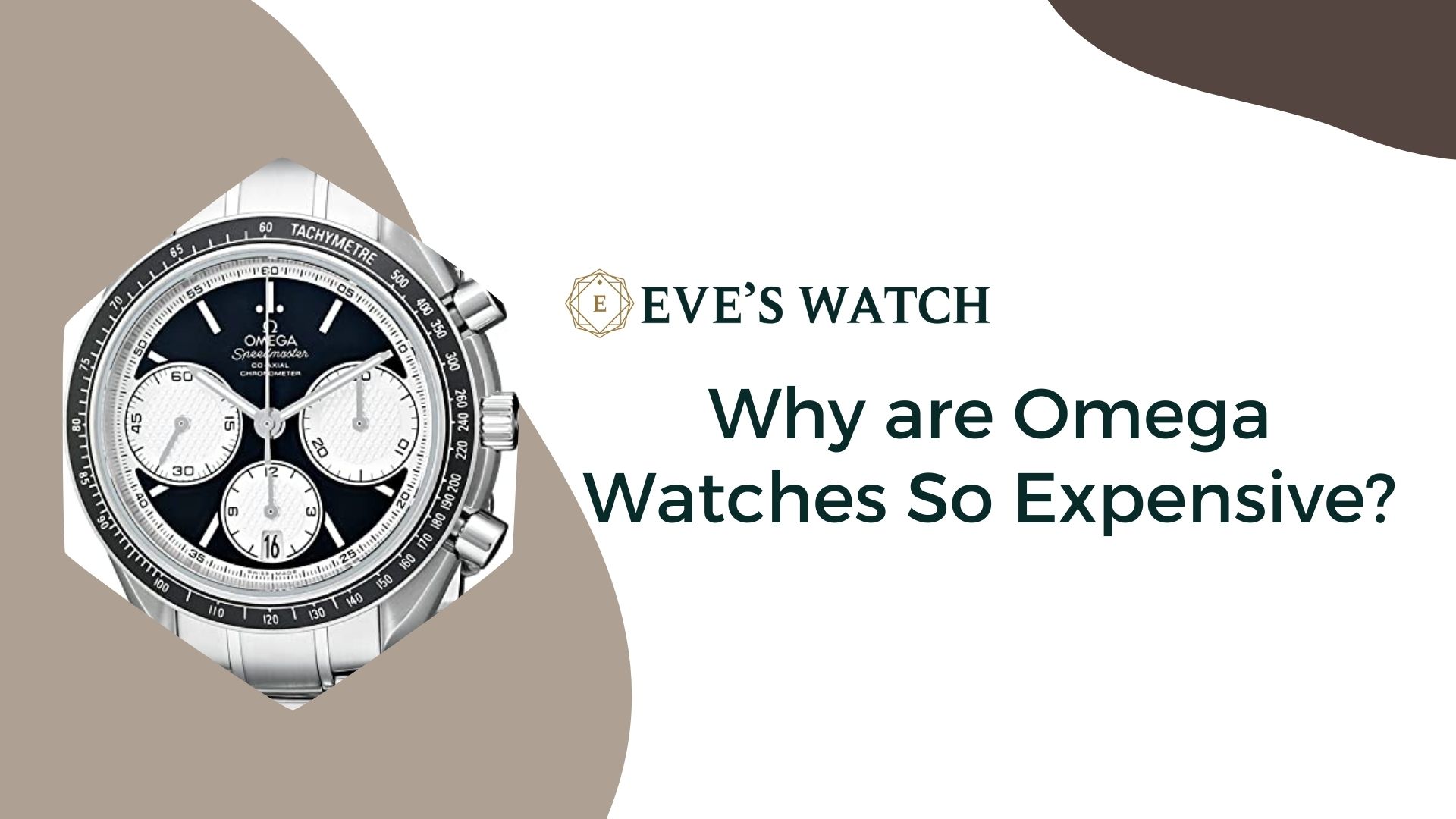 How much can you cough up for simple watches?

Now, if you’re thinking of splurging on exclusive luxury designer watches from brands like Omega, you might be wondering why these luxury brands assemble some of the world’s most big-ticket watches.

What is the mystery behind their prices, and why do their value shoot up unimaginably year after year? You might also ask, “Why are Omega watches so expensive?”

Well, welcome to our corner where we break down the average value of Omega watches and why they cost a fortune. Every collector of the most expensive and finest watches knows that luxury brands will deliver the classiest timepieces.

When it comes to fashionable, quality, and high-class watches, Omega SA has solidified its presence in the fashion world. However, there are so many reasons why these collections are worth a fortune. And one of these undeniable factors is their long-lasting history in watchmaking.

If you are interested to know more about why are Omega watches so expensive, keep reading.

In-Depth Review: Why Are Omega Watches So Expensive?

For a product whose development goes as far back as the 1800s, you have to admit, Omega watches have built quite a formidable brand.

Created by Louis Brandt in 1848, this brand has been around for centuries. He carved a niche by creating pocket watches using locally made parts that are easily replaceable. This way, he established a solid connection with domestic artisans and reduced the cost of production.

Simultaneously, he was also able to build a strong relationship with customers across Europe, such as in England, Scandinavia, and Italy; upon his death, his sons took over the company.

Similar to their father, they refused to outsource production of the watches. Instead, they ensured that all products were made by them. They named it the Omega Watch Co., and the company was officially founded in 1903.

Although this company has faced several challenges like other brands, its long-lasting presence and value indicate that it has earned its spot amongst luxury watches.

Omega Watch and Its Connection With NASA

For more than a century, Omega SA has been chosen by astronauts as their most-loved timepiece when leaving earth.

“The astronauts were our heroes. Our whole lives revolved around space, and OMEGA was the watch that went to the moon.”

The Omega Speedmaster, one of the many flagships of the watch brand, was first introduced in 1957. This was the chronograph that was worn by Astronaut Walter Schirra in 1962 during his Mercury-Atlas 8 mission.

The aeronautic engineer Buzz Aldrin wore the Omega Speedmaster Professional Chronograph. Aldrin was part of the Apollo 11 space mission, the first team to visit the moon in 1969.

Not many watch brands get this rare chance to land on the moon, and outstanding feats like this further solidify a brand’s reputation in their industry.

To express how important it was for a brand to achieve such an exclusive feat, winning the bid became a competition between Omega and Bulova, another watch brand.

However, Omega SA got a rare chance to become the only luxury brand to land on the moon.

Like Other Luxurious Brands, Omega Watches were Made in Switzerland

It’s safe to say that Switzerland is home to many fashion brands and luxury watch companies, and this is the same for Omega SA. Rolex and Patek Philippe watches assembled in Switzerland.

The Vacheron Constantin watch, also a rival of Omega SA, is one of the Swiss watches with a high profile.

So, it’s safe to believe that luxury brands that set up their assembly plants in Switzerland cost a fortune.

Other deluxe brands coupled in Switzerland are;

However, these other brands are subsidiaries of the Swatch Group, owners of the Omega Watch. This brand proves yet again just how big the Swiss brand is in terms of producing luxurious watches.

A Luxury Watch with an Impressive Warranty

If you adore exclusive luxury watches, getting one with a long-term warranty is an additional package. No one wants to lose thousands of dollars on a luxury brand that is not safe or trustworthy.

When brands embark on this long-term journey with their customers, it often comes with a cost. This is especially true if the damages occurred during the warranty period are extensive.

On the flip side, brands that boast longer warranty periods become more trusted over time.

The warranty policy of an average luxury Omega Watch is usually up to five years, which is far more than the two-year limit offered by most watch brands in the industry.

Extended warranties can also be offered for more costly watches. This warranty signifies the brand’s confidence in its products and increases its trustworthiness.

A Luxury Brand Known for Authenticity

The bane of any creation or product is a counterfeit or fake substitute. Many brands have been destroyed because of too many counterfeits in circulation. This brand is worse when it is hard to identify original timepieces from their knock-offs.

The issue of piracy and copyright infringement is a battle that many organizations still struggle with. Therefore, it is essential for companies to proactively protect themselves from this by making their brand hard to imitate.

The Omega brand has a wide range of products exclusively available to the upper class. Hence the premium prices attached to the majority of its products.

This way, the first thing that might give away a similar but counterfeit product is its price.

The average Omega Watch costs around $5,200 to $7,150. Therefore anyone not within the upper echelon of society might look away from the shelves.

However, the luxury brand recently released a much more affordable version of its Omega Speedmaster Moonwatch.

This typical Swiss-made watch serves as a connection between the company and average individuals who cannot afford its high-ticket products.

While this dress watch might be a bit easier to imitate, the company was transparent enough to state the materials used and give an average price listing of the expensive timepiece.

To further protect the value of its products, Omega watches adopted strategies. A few examples include strict controls of retail prices, using the brand as a symbol of prestige, premium, attractive packaging, and exquisite production mechanisms.

One of the most effective marketing strategies of brands like Omega SA and Rolex deploys is influential marketing with well-known TV personalities and aristocrats. Celebrities have always been a key entry point for any product or invention in the fashion world.f

Since they are admired by the public, they become effective brand ambassadors for any company. The majority are trendsetters, experimenting and creating fresh and long-lasting styles that reign for decades.

Omega watches hacked this marketing style by attaching itself to the James Bond franchise.

In the James Bond movies such as “GoldenEye”, “Casino Royale”, and “Quantum of Solace, the actors wore various models of the Omega Seamaster Planet Ocean.

Despite the many celebrities who adorn this luxury brand, Omega has always been very conservative and picky in choosing its brand ambassadors. Not just any household name can be called on to represent the brand, and this has further helped increase its value.

A few celebrities to represent this brand include George Clooney, Daniel Craig, Cindy Crawford, and Nicole Kidman have been ambassadors for over 20 years.

Believe it or not, there was a whole era of stiff competition between Omega SA and Rolex, which possibly still exists. After all, they are both giant watch companies assembled in the same country, and competition is inevitable.

However, these two giant companies have thrived together for decades and even survived two world wars and the Quartz Crisis in the 1950s. This is where most of the world abandoned mechanical watches and switched to digital watches.

To survive these crises, both companies attempted to explore the making of quartz watches. They released a few products to cater to the customers whose preferences had changed. Nonetheless, they have continued to produce their traditional watches.

Although these two brands share several similarities in business execution, differences still abide. While Omega watches are best known for their classy yet professional looks, Rolex watches are known for their elegance, evolutionary mechanism, and accuracy.

Omega Watch: A Brand of Many “Firsts”

While Omega SA was founded 50 years before Rolex, the latter grew to become a giant competitor by adopting the former’s strategy of making groundbreaking innovations.

Aside from being the first watch on the moon and its association with the James Bond movies, Omega SA is also the official timekeeper at the Olympics. This watch is a position it has held for many years to date.

One thing we can learn from this brand is to invest in innovation, research, and implement creative ideas to secure a solid position in any industry. These factors have kept Omega Watches at the top and will do so for years.

We hoped we answered your question to why are Omega watches so expensive. These timepieces are pricey for many justifiable reasons that most large brands cannot comfortably boast.

If you are looking for a watch brand that holds a lifetime of economical value, just put your savings together and go for Omega watches. These are one of the best luxury watch brands.

If you liked this article, you might want to read our other articles at EvesWatch.com.