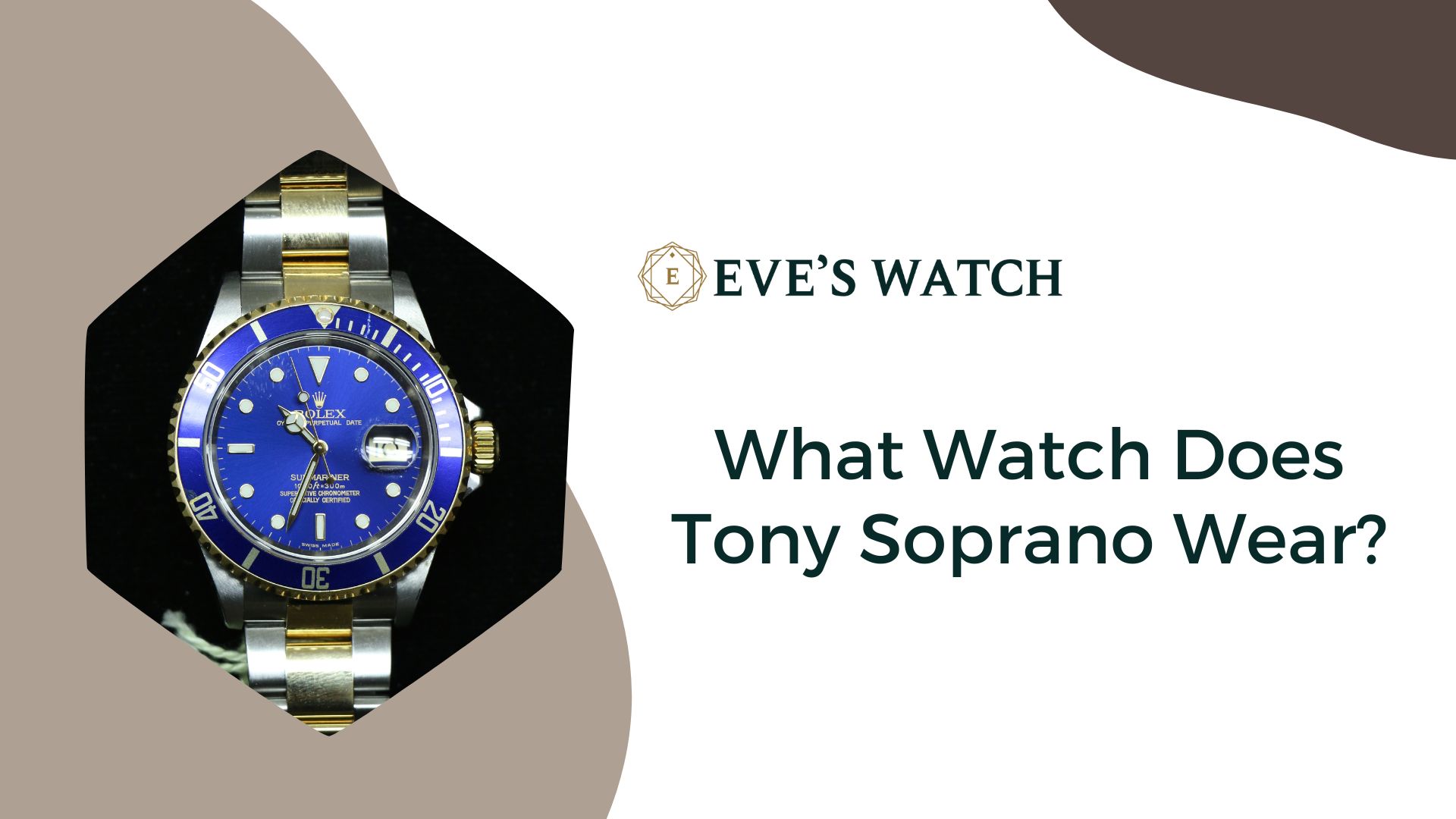 Tony Soprano is one of the most enduring characters in American television history, and that’s not an exaggeration. Every time the man appears on the scene, he demands your attention.

Therefore, it should come as no surprise that people became curious about the timepiece he was wearing. After all, it spoke volumes.

At EvesWatch, we consider these watches in film and television more than accessories. For us, they’re items that extend the character’s identity. Their watch choices are also reflections of their priorities and ambitions.

So, if you’re curious about Tony Soprano’s timepiece in the television drama, look no further. We’ve compiled a list of it below. But to better appreciate the man’s watch choice, let’s get to know him first.

Who is Tony Soprano?

Anthony John “Tony” Soprano is a fictional character in the American crime series, The Sopranos. The story revolves around an Italian-American Mafia crime boss named Tony.

The New Jersey mob boss deals with personal and professional issues in his home and business life. This experience affects his health, causing him to seek professional psychiatric counseling.

Many have described Gandolfini Jr.’s portrayal of the role as one of the most influential and outstanding performances in television history.

So, What Watch Does Tony Soprano Wear?

It’s not just one timepiece that the titular character wore in the series. Throughout the drama’s six seasons, Tony advances from an underboss to the street boss and, finally, the mafia boss. So, it makes sense that he wore different timepieces throughout these changes.

Befitting his character, you can see Tony wearing a Rolex Day-Date President 118238 with a champagne dial. At first glance, you may think it’s a gold dial, but you’ll notice a difference upon closer look. It is a timepiece that asserts Tony’s top-dog status.

It’s a 36mm watch that earned the nickname the “President” when the luxury timepiece brand gave one of it to then-US President Dwight Eisenhower. Moreover, it has undergone different modifications, like adding the hack feature.

It has also enjoyed a sought-after status since it was released in 1956. So, if the gold timepiece is good enough for a President, it may also look great for a US mob boss.

As for the Rolex Day-Date President 118238 model that Tony chose, it is a true icon of the luxury watch industry. The overall aesthetic of it looks stunning.

For many watch collectors, this exact model also presents a point of the Day-Date history when it adopted modern present-day design. It’s made of 18k yellow gold and features a date display, day display, and time with running seconds.

Furthermore, this reference hosts various amenities to the table, from slight nuances of the bracelet and the case to the movement that powers the timepiece.

Additionally, the broader lugs are more significant than older Rolex Day-Date models. It has a highly polished finish and is a little bit heavier on the wrist because of entirely solid links (meaning built with more gold).

This timepiece also has an enhanced concealed folding clasp called the Crownclasp. The purpose of it is for better comfort, on-wrist aesthetics, and security. Many people like this watch because it suits the wrist nicely and carries a hallmark trait of modern Rolex timepieces.

Related: Where Are Rolex Watches Made?

There was an episode in The Sopranos in 2002 that Tony gifted his cousin a watch. That watch was the Patek Philippe Ref 5037.

Functions of this timepiece include day, date, month, hours, minutes, seconds, 24-hour indicator, and an annual calendar. It is also powered by an automotive movement Calibre 315 S QA 24H.

Tony Soprano gave this watch to his cousin-in-law Brian Cammarata as a thank-you gift. “This is like a $15,000 watch, Tony. I can’t take this,” the cousin told Tony. At that time, the original retail price of that Patek was significantly more than this.

Surely enough, the same diamond-encrusted timepiece is the perfect watch for a kingpin. This excellent timepiece is worth paying your trust if you’re planning to buy your first luxury watch.

3. Rolex Submariner (Worn by James Gandolfini, the Actor Himself)

Whether the actor James Gandolfini owned the Rolex model earlier mentioned is still being determined. Still, it is known that the actor is a big Rolex admirer and was often seen wearing it.

Another classic timepiece that Soprano wore on the scene was the Rolex Submariner. A timepiece that is worn by the world’s most recognizable celebrities that added to their reputation as symbols of status, wealth, and power.

This model is a complicated timepiece, partly because of the limited number made and the number of parts used when assembling it.

The Submariner also features a waterproof Oyster case, a unidirectional rotating bezel, a water resistance of 1,000 ft. (300m.), and a self-winding Perpetual movement.

Moreover, this watch comes from a line of diver’s watches from the same brand, released in 1953. Rolex claims this watch to be the second significant breakthrough in the mastery of waterproofness after the invention of the Oyster, the first waterproof wristwatch in the world, in 1926.

The new generation of Rolex Submariner looks like the previous one in The Soprano. However, there have been upgraded details.

The latest model, reference 126610LN, has boosted the mechanics and design. What’s changed is the case size (from 40mm to 41mm). The change in size may seem negligible, but it’s pretty noticeable when you put the two watches side by side.

The design has likewise slightly altered, along with the changes in the bracelet size and the crown. The new Submariner still features the same Maxi dial from its predecessor, but the handset has been changed a little.

For instance, the minute hand is not longer and reaches the minute track. Its hour hand is likewise a bit wider. The proportions have been changed, and the dial has become more balanced and spacious.

However, we like this change because it created a somewhat tidier appearance and helped to increase the timepiece’s visibility even in low light conditioning. This change is also beneficial for divers when diving underwater.

Other Watches Linked in The Sopranos

It’s a model that has been a part of Rolex’s catalog since the 1930s. The robust stainless steel and precious gold mix bring the wearer the best of both worlds. The most classic choice of this Lady Datejust is the yellow gold and steel, but you can also see white gold and Everose colors.

Like other Rolex models, the two-tone Lady Datejust was also built to stand the test of time.

Moreover, this stainless steel watch was introduced in 1963 and designed for professional racing drivers. It is an icon, not just in name but in function. More than 50 years after its release, this watch remains in a class of its own and continues to transcend time. It’s robust, sporty, and an ultimate grail watch.

If you’re looking for other watches worn by Hollywood mobsters, let’s not forget the Omega La Magique in the American crime film Scarface.

The watch features the thinnest movement to date from the brand. It was the Omega Calibre 1357. The timepiece likewise features a quartz movement and an 18k gold case.

Next on our list is Audemars Piguet Royal Oak, which appeared in the film The Godfather.

Its appearance in the mob drama left an impression on television history so important that the definition of what a luxury timepiece it is today and the cinema culture have been uniquely and irrevocably shaped by them.

The timepiece was released in 1972 and came on an integrated bracelet with an extra-thin perpetual calendar. They also built the movement on the Jaeger-LeCoultre caliber 920.

That covers it all.

TL;DR: The watch worn by Tony Soprano is the Rolex Day-Date President. He also gifted a Patek Philippe Ref 5037/1G to his cousin in the film.

While it’s unknown whether Gandolfini owns the Rolex, he is known as a Rolex fan as he was also often seen wearing the Rolex Submariner.

These watches are more than just timepieces. They’re collectibles.

Focusing on the Day-Date President, we can say it’s the epitome of reliability and durability. It also has excellent resale value.

It’s a watch you can wear in different dress attires and situations daily. It’s robust and has absolutely the perfect weight proportions and size. It gracefully ages as you wear it and looks stunning brand new.

No wonder it has been positioned in the brand’s portfolio.

If you like this review, please read our other reviews at EvesWatch.com.