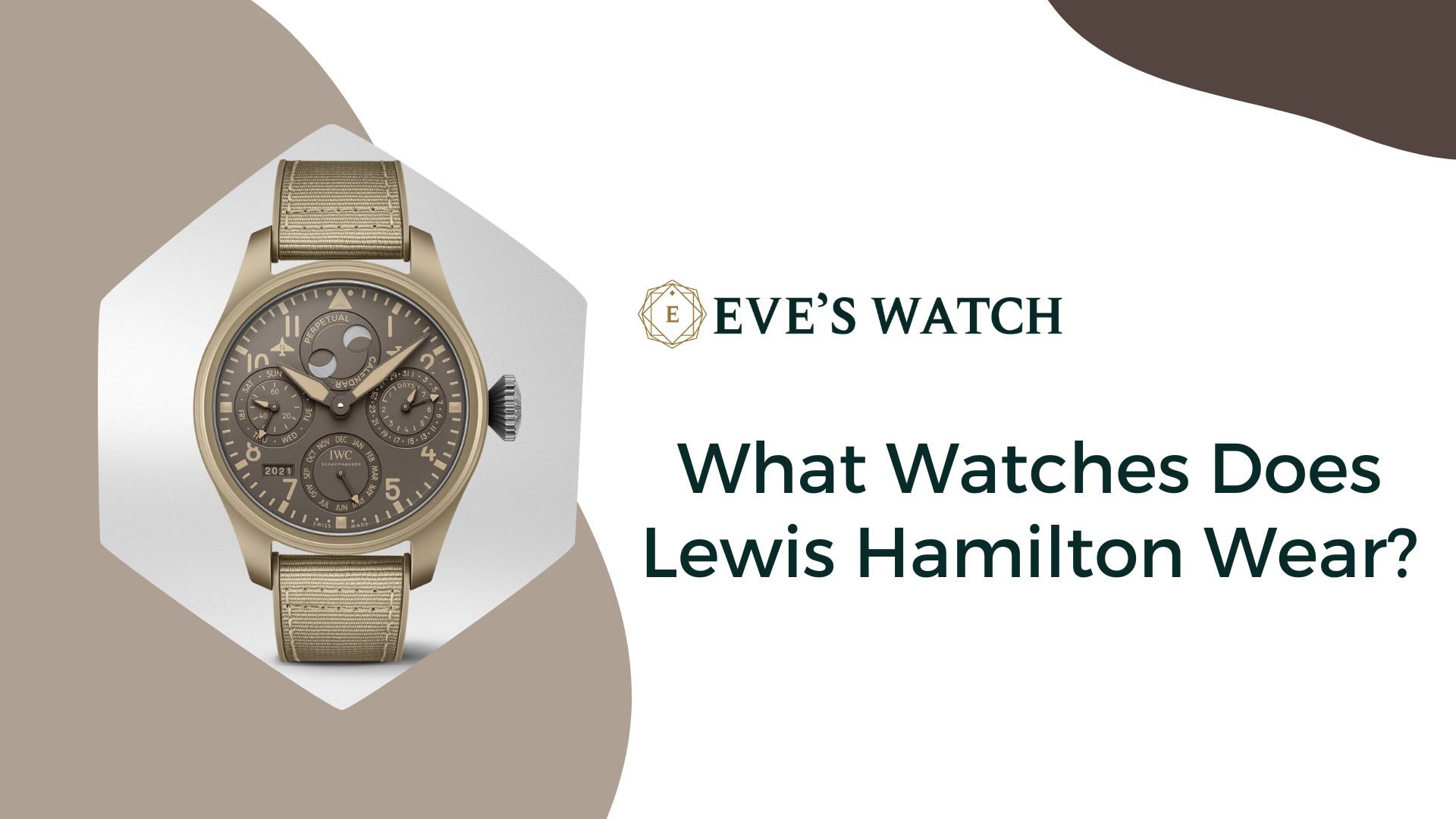 The worlds of watchmaking and automobiles are often connected, especially when it comes to motorsports. British racing driver Lewis Hamilton is a testament to it.

Off the racing track, Lewis is a style star even up to his choice of timepieces. These watches are almost as impressive as the man’s achievements.

In case you’re wondering what these watch models are, we’ve got an answer for you.

But before that, let’s get to know who Lewis Hamilton is and take a trip down memory lane to his achievements as one of Formula One’s greatest racing drivers. Enjoy!

Who Is Lewis Hamilton?

Lewis Carl Hamilton is a British racing driver. He began his driving career as early as eight years old. By age 10, he had already won the British Kart Championship. He was signed to the McLaren and Mercedes-Benz Young Driver Support program three years later.

In that program, he developed the skills that helped him set a record of being the youngest driver to be ranked first in the world karting championships when he was 15.

Hamilton progressed to car racing. In 2003, he won 10 of the 15 races he entered in the British Formula Renault race. The F1 star also participated in the Formula Three Euroseries championship the following year. Then, he joined the Grand Prix 2 team.

The GP2 race series prepares drivers for Formula One. F1 is the highest class of international racing sport for open-wheel, single-seater, and open-cockpit formula racing cars.

In 2014, Hamilton dominated the F1 season and achieved a career-high 11 races. He was just as dominant in car racing in 2015 as he won his third drivers’ championship.

Hamilton is also known in the Formula 1 community for his “Still I Rise” tattoo across his shoulders. The exact words were seen across the back of his helmet. To people unaware of its meaning, it’s inspired by his brother, who is coping with cerebral palsy.

Additionally, the racer said that motto inspired him to keep pushing and rising despite the number of times he tumbled down. “He wasn’t given the legs that worked properly. But, he would get back up and try again,” Hamilton said, referring to his brother.

What Watch Does Lewis Hamilton Wear?

Hamilton wears IWC watches, but he sometimes switches to something different. Inside, his luxurious watch collection includes watches from Patek Philippe, Rolex, and a custom Black Lives Matter Ceratanium.

It looks simple yet elegant with its sand-colored ceramic case. It is also composed of 54 jewels, 381 compounds, a 52615 Caliber automatic movement, and a power reserve lasting up to seven days.

The Top Gun collection was launched in 2007 and designed for the Navy Strike Fighter Tactics Instructor program (TOPGUN). That program inspired a movie.

Since Hamilton is the brand ambassador of IWC, you can expect that he owned other watches from the same brand.

This watch was developed initially by the IWC and Mercedes-AMG Petronas Formula 1 team. The collaboration’s goal was to create the first “team watch” for the staff, including aerodynamicists, designers, strategists, mechanics, and race engineers.

But don’t worry; this IWC timepiece is now available for a wider audience. This model combines the classic Pilot Watch’s elements with the F1 team’s signature colors. It goes beyond having new tones, although it retained the exact dimensions of the IWC watches from their classic collection.

Moreover, the 14066m in height and 41mm in diameter are no longer made of steel but from grade 5 titanium. It is a rigid and lightweight alloy, long been used in the automobile industry to produce car parts that are subjected to immense stress than other parts.

The watch’s case is mainly sandblasted, resulting in a dark grayish color. It also features polished accents on the bezel, pushers, and crown. Both sides of the case feature sapphire crystals with a comfortable water resistance of 100 meters and a screw-down crown.

Another watch Hamilton owns is the IWC Perpetual Calendar Edition. This model was just released in 2021. It features a blue sunburst dial, a satin finish, contrasting white Arabic numerals, red accents, and a minute track. All of these details provide a beautiful splash of color.

Before the release of this model, the F1 star co-designed a limited Perpetual Calendar timepiece that bore his name. The watch has a burgundy texture strap, a black ceramic with a matte finish, red gold-plated hands and markers, and a matching sunburst dial.

Lewis Hamilton also made a statement at the Formula One Miami Grand Prix by wearing these three IWC watches (Mojave Desert watch, 41 Edition Mercedes-AMG Petronas, and Perpetual Calendar Edition) to defy a jewelry ban imposed by the F1’s governing body.

At that time, there was a lot of sporting royalty in attendance, including David Beckham, Tom Brady, Michael Jordan, and Lebron James. These legends in their sports have one thing in common – their love for watches.

The watch that Hamilton often wears is the IWC Big Pilot’s, Saint Exupery. It’s a timepiece designed as an ode to aviator and novelist Antoine de Saint Exupéry. The F1 star wore it to media interviews and important red-carpet events.

This watch was released in 2017 with a beautiful red gold case complemented by a sunray finish tobacco dial, a matching brown calfskin strap band, and luminous hands. Aside from boasting an annual calendar feature, the timepiece is powered by the 52850 movements with a seven-day power reserve.

IWC CEO Chris Grainger-Herr confirmed that the bracelet used is Ceratanium through his Instagram account as well. This Big Pilot watch may be the first ever timepiece from IWC to have a Ceratanium bracelet and case.

The timepiece was an all-time variant of the Big Pilot Perpetual Calendar, and some people find it “bad-ass cool.”

It’s sporty and durable as all other Rolex watches. It has the right weight and size proportions, looks stunning brand new and continues to age gracefully as you wear it. If you’re wondering if this timepiece is a good investment, it sure is.

The Rolex Cosmograph Daytona makes an excellent investment because it usually increases 2.76 times its price market upon reselling it. Its price keeps rising for many reasons, including the inner workings of each piece and worldwide brand recognition.

For the Rolex Daytona that Lewis wore, it has a stunning tachymetric scale, pushers, and three counters. It was created for endurance racing drivers as their ultimate timing tool.

We understand why it’s Hamilton’s choice because it’s a high-end sporty timepiece. It’s ideal for wearability and size with its 40.5 mm casing. It has a black gradient dial, which looks like a graphite gray or smokey brown when illuminated.

It’s not the most advanced or most complicated chronograph. Yet, every time you look at it, it’s hard to capture this horological marvel in words. It features a Geneva-quality emblem, and its band is a visual pleasure.

The Patek Philippe Nautilus Chronograph is also comfortable to wear as it’s robust and adequately built.

For people who still have the racing bug or are just a fan of Lewis Hamilton, you know by now that he’s a big fan of the IWC watch brand.

The watches he has in his collection include the Big Pilot’s Watch Top Gun Mojave Desert, Mercedes-AMG Petronas Formula One Team watch – Chronograph 41 Edition, and the IWC Big Pilot. He also owns watches from well-known brands, including Rolex and Patek Philippe.

Overall, these timepieces are legendary for all the right reasons. So, if you’re looking for a new sports watch or an automotive-inspired timepiece, you might consider these timepieces.

At EvesWatch.com, we’re always looking for the most outstanding and latest timepiece trends. Check out our other reviews to learn more about celebrity watches.