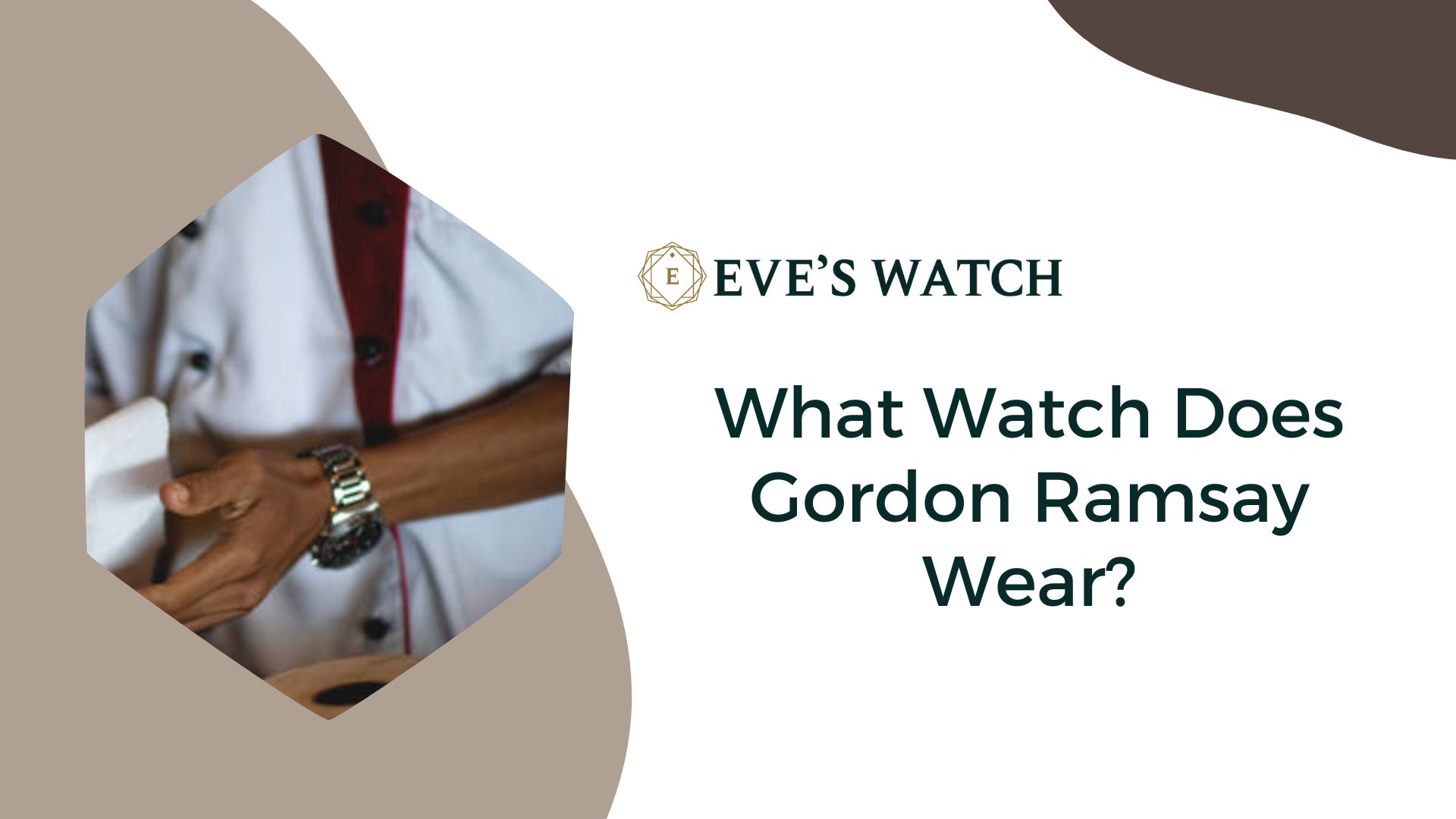 Timing is vital in the kitchen; that’s why some chefs wear a wristwatch – yes, they’re allowed to wear it – while cooking.

From Chef Dan Kluger’s Timex to Chef Daniel Humm’s Royal Oak Tourbillon, the watches chosen by famous chefs are as intriguing as the haute cuisine they make.

In this article, I’ll discuss the watch or watches chosen by one of the world’s top chefs: Gordon Ramsay. But before that, here’s a brief background about the British chef:

Who is Gordon Ramsay?

Gordon Ramsay is a British restaurateur, chef, TV personality, and writer. From humble beginnings in Scotland, he created a successful restaurant group that garnered 17 Michelin stars, the most prestigious award a restaurant can receive.

“We didn’t have a glamorous kitchen,” says the British chef, referring to his childhood. Yet, he learned his way around the kitchen from his mother. His mom was a cook at a tea shop. Today, the man is one of the most influential chefs in the culinary world.

Despite being infamous for his frequent swearing, strict attitude, and fiery temper in the kitchen, Ramsay is well-loved in the UK. Whenever he appears on TV, he always has a watch on his wrist.

That said, let’s unveil what his watch or watches are.

Gordon Ramsay owns notable timepieces. These include the following:

One of Gordon Ramsay’s favorite Rolex timepieces is the GMT-Master ref. 1675. It comes with a 24-hour scale and a black dial.

First released in 1959, Rolex continuously enhanced this watch until its production ceased in the 1980s. Since then, this watch has become more popular among collectors.

Another timepiece included in his watch collection is the Rolex Submariner ref. 1680, which Rolex produced from 1967 until 1975. The date window is a new feature not seen in this watch and previous Rolex models. Companies didn’t think a dive watch needed a date window back then.

Gordon wears his Submariner ref. 1680 with a brown leather strap, an aesthetic that emphasizes the vintage and rugged look of the Submariner. This watch is also called the “Red Submariner” because of the red inscription on the dial.

It was the first Submariner to have a date window and a Cyclops lens above it. Therefore, it is a rare, highly prized Rolex model with historical significance in the brand.

Another Submariner seen on the wrist of Gordon Ramsay is the Rolex Submariner 18k White Gold ref. 116619.

This watch is also known as “The Smurf” because of its blue ceramic insert and blue dial, giving a modern appeal. It has a unique combination of white gold material and a blue dial. Another stand-out feature of this watch is the Cerachrom bezel.

Additionally, it likewise features an Oyster steel bracelet. So, overall, it’s an aesthetically pleasing, reliable, and durable watch. It sits with pride in Ramsay’s watch collection.

Gordon Ramsay owns a classic Rolex Submariner 14060. It’s classic because it features a pre-Super case, a Maxi dial, an aluminum bezel insert, and has no date on the dial.

Moreover, contemporary Rolex Submariners have more features than the reference 14060. Some features include an Oyster bracelet made from stainless steel and water resistance for up to 300m depth, which makes it a great diver’s watch. It truly complements Ramsay’s style to a tee.

One of the most discreet timepieces in the British chef’s collection is the vintage Rolex Explorer II ref.16550 with a cream dial. He seemed to have a unique taste for vintage timepieces because he owned a reference 1680 with a brown leather strap.

That model was also produced in 1969 and has become a difficult watch to get. You’d need to offer at least US$21,000 to own it.

Must Read: Best Vintage Watches Under $1000

The famous Chef also had this beautiful Yacht-Master Everose Gold in his watch collection. Like the other Rolex watches, the Everose Gold holds its value very well.

In addition, this model is easily identified by its bold numbers and large hands, making the watch easy to read in challenging situations.

In addition to its beautiful satin and yellow gold finish, this luxury watch boasts a blue topical dial and a matching blue aluminum bezel — the color ages to a deeper hue over the years. The dial is likewise topped with yellow gold nipple hour markers plus Mercedes hands with lume.

This luxury watch is a suitable statement piece for moderate wear and special occasions.

Must Read: Which Watches Hold Their Value The Most?

Plenty of timepieces from this brand are luxury timepieces, but the chef opted for the most basic pilot’s watch. Still, you can’t say it’s affordable as it’s a limited edition. They only produced 1,948 of these watches and sold one for $5,750.

However, this IWC model is not a heritage watch but is inspired by one. It carries quite a weight since IWC did produce such watches during WW2. IWC Mark 18’s predecessor, the IWC Mark 11, was a navigator’s watch developed for the UK Royal Air Force.

The current model still looks like the old IWC Mark models but with bolder and thicker font and indicators.

What many like about this timepiece is how cohesive it looks. The newer Mark series may feel larger on the wrist, but it remains versatile. Overall, it makes an excellent option for Gordon Ramsay’s watch collection.

Gordon also had a room for the Omega Seamaster Professional Chronometer ref in his collection. 25318000. Many have spotted him several times wearing it, especially while filming Hell’s Kitchen.

This watch is an Omega classics variation and is one of the most low-priced and modest in his collection.

Gordon owns several other popular brands, including the Breitling Aeromarine Chrono Avenger. This yellow watch has a stunning yellow dial with three black sub-dials that make the watch pop.

Additionally, this watch is powered by a quartz movement, has a chronograph function, and has just the right size for the wrist (44m in diameter). It likewise features a titanium unidirectional rotating bezel, making it easy to measure an elapsed time. It’s also a feature that’s particularly useful for divers to avoid miscalculating their dive times.

Despite what many people think, this model is not a Chronomat. Instead, it has a smaller diameter vs. the Chronomat, is thinner, and has a smaller lug width.

Must Read: Breitling Service Cost: How Much Should You Expect To Spend?

Finally, among the wristwatches that Chef Gordon owns but is used the least by the public is the JS Watch Blue Sif NART 1948.

The JS Watch Company is the first and only watchmaker in Iceland. So, maybe the chef’s taste for this model is because he’s a great fan of Iceland. He has also become a frequent visitor to the country for work and pleasure.

They designed the JS Watch Blue Sif NART 1948 model in honor of the Icelandic Coast Guard, which guarded the North Atlantic seas for more than 60 years. It’s a classically styled pilot watch made from the finest German surgical grade 316L stainless steel with anti-reflective sapphire crystal.

Lastly, it has a 40-hour power reserve and is water-resistant to a depth of 1,000 meters.

What watches does Gordon Ramsay wear?

What kind of yellow watch does Gordon Ramsay wear?

What chef made Gordon Ramsay cry?

It was Marco Pierre White, Ramsay’s first boss. White is a renowned chef who earned three Michelin stars when he was 33.

Many believed that Ramsay cried while working at the Harvey Restaurant. Ramsay claims that his then-boss threw some sauces at him, although White shared a different perspective. He says, “[Ramsay] made himself cry – it was his choice. No one has the power to make a person cry.”

White continued, “The kitchen is a tough place. I just do my job.”

To sum it up, Chef Gordon Ramsay’s watches complement his colorful culinary career. He is pretty classy as a watch collector.

He owns a few gold Rolexes (very luxurious) and more functional timepieces. Moreover, he’s not afraid to wear them in the kitchen. No wonder many watch enthusiasts are keen to observe what the chef will wear on his wrist next.

If you like this review, please read our other reviews at EvesWatch.com.