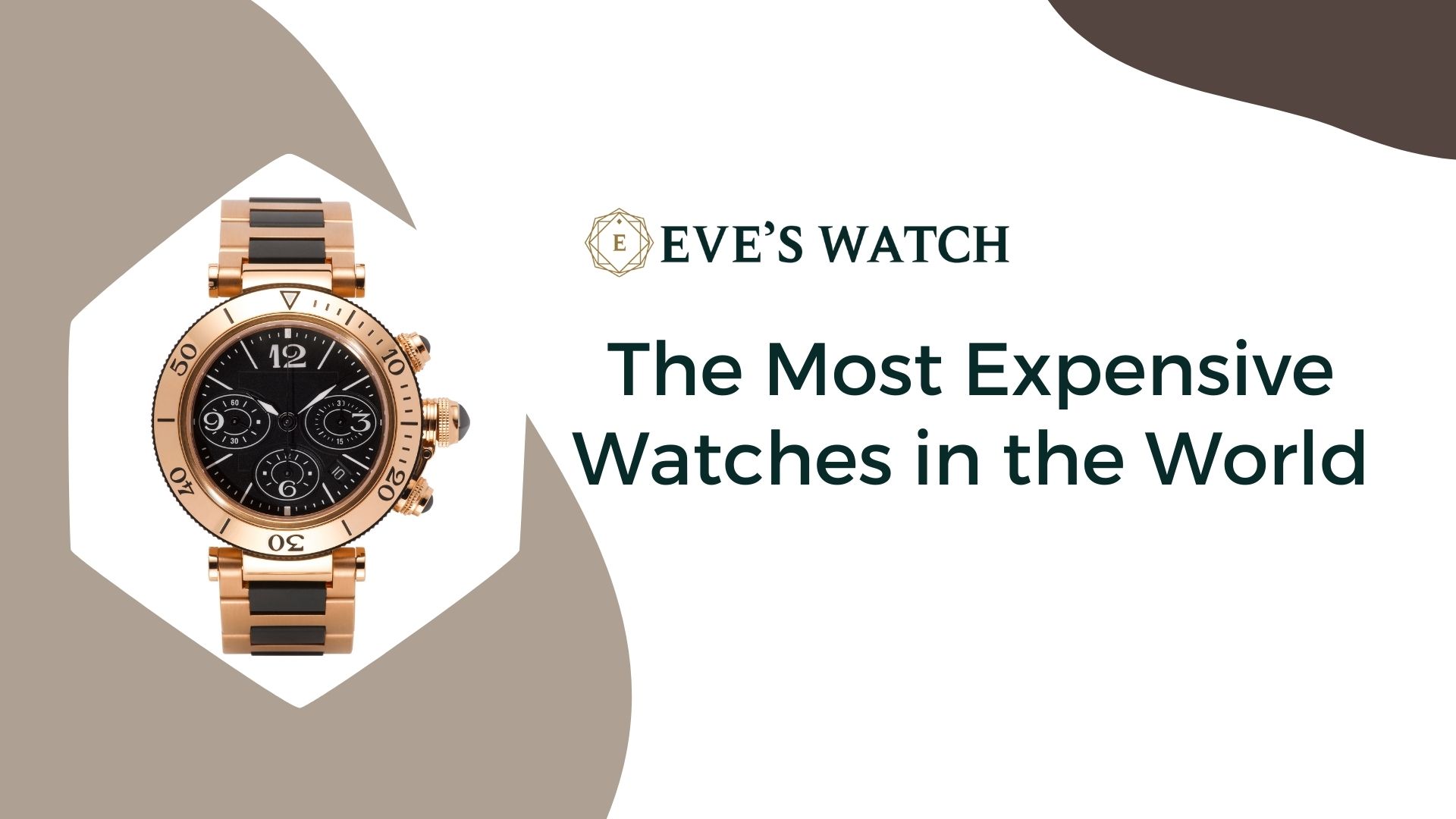 Have you ever wondered how much your favorite TV personalities, athletes, and fashion glitterati throw on timepieces?

The most expensive watches in the world are not the usual collections, nor are they designed to meet specific needs. They are thought off and assembled to break records and become attractions to even non-fashion enthusiasts or become a symbol of affluence for royal families and the aristocrats.

These expensive watches cost a thing for justifiable reasons right off the bat.

Their exquisite engineering, platinum bracelets, collection of precious stones like white and yellow diamonds, and their exclusivity, are some of the reasons why they are exceptionally accessible to only a few.

Spoiler alert: some of these rarest watches cost over $30 Million.

So if you’re elated like me to discover the classes of expensive watches that just 1% of the entire world population can own, then read on.

Thinking that an intricate timepiece can sell for as high as $5 Million is a laughable joke. However, in this article, the most expensive watch brands have found ways to “sell” timeless pieces to the affluent only.

The rare Patek Philippe world timer ref. 2523/1 Is a classic example of a billionaire watch. It sold for a jaw-dropping price of $5,545,999 at Phillips, in Association with Bacs & Russo’s Geneva Auction XII, making it one of the two vintage Patek Philippes’ watches ever sold at auction.

The piece, graced with a guilloché dial, was dubbed the “mythical” by Patek. No wonder why it only needed an auction to change ownership.

Patek’s 24-city world-time watches are rare and hold a high level of value because of their guilloché or enamel dials.

When it comes to the winding dials, the 2523 flagship was the first luxury timepiece by the brand to carry Patek’s new two crown system – one winds the clock while the other control the city disk.

Created in 1989, the Patek Philippe Caliber 89 is an exclusive pocket watch designed to mark Patek’s 150th anniversary in watchmaking.

When assembling the watch, it was labeled “the most complicated wristwatch in the world” when making the pocket watch, and it wasn’t just for papers. Its features strongly backed up the claim.

Some of the complex features that placed it at such an exorbitant price are:

According to Hodinkee, the stunning timepiece has had difficulty changing home as bids fall under $6.5 Million for the masterwork.

Other expensive watches that sold within this same jaw-dropping range of $5-$7 Million are:

Usually, when expensive watches are in the auction, outsiders rarely know who the collectors are. However, the case isn’t the same for one of Patek’s masterworks.

This Rolex Daytona watch sits on the number two spot of the most expensive Rolex watches sold at auction. Number one is Newman Daytona, which sold for $17.75 million. The Rolex Daytona Ref. 6265 was sold for sale for $6.1 million by John Goldberger.

Other Patek luxury watches that graciously sold for over $6 million

The Most Expensive Watches Sold For $7 – $17 Million

When you think timepieces worth around $5 Million are overpriced, they are put mainly together for mere showoffs that appeal only to the elite. We discover that there are expensive watches that $6 million cheques can’t buy.

Let’s look at these timeless pieces of jewelry that we both can only admire from afar. It’s only getting more “complicated” from here, literally.

Assembled by Vacheron Constantin and introduced in 2015, the monumental piece with Reference 57260 is currently the world’s most complicated watch.

One of its most rare functions is its ability to time multiple events concurrently with two novel features: a Hebraic perpetual calendar and rare Rattrapante chronograph watches.

It’s worthy to note that the expensive watch was born out of a dare by an anonymous collector who challenged Vacheron Constantin’s Atelier Cabinotiers division to create the world’s most complicated wristwatch.

In 2016, one of Patek Philippe’s masterworks fetched over $11 million in an auction to sit pretty as the most expensive watch by the luxury brand to ever be sold.

This watch is assembled with horological art, ultra-sophisticated, and features such as a perpetual calendar and moon-phase technology, and hands to mark the Arabic numeral hour.

As a testament to the brand’s craftsmanship, the timepiece started at less than $3 million. However, the bidding battle ended at $11.1 million.

While the brand’s most luxury watches are made of yellow or rose gold, the body of this particular piece was made in a stainless steel case. It was created 27 years before the company started producing stainless steel watches.

The Most Expensive Watches Sold From $17 Million And Beyond

If you are less interested in collecting art and jewelry than the elites, you will never understand why a timepiece should sell this high; it’s extortionate.

But the affluent disagrees that timepieces are only a piece of jewelry. It’s class, a culture known only to the elite.

The most interesting part; he bought this watch for just $200 when it was released. He wore it so much, the watch became known as the Paul Newman Rolex, and several decades later, he sold it at an auction for such an insane price. Talk about a worthy investment!

To the average guy, this Rolex watch might not seem like it’s worth that amount of money. But to members of the upper class, exclusive and rare opportunities like that are worth every penny.

The Chopard 201-Carat Watch (sold for $25 million) belongs to a class of its own, only made for the elite who understand complications’ worth.

Assembled in 2000, Chopard went overboard to impress the elite with an 874 high-grade diamond band so sophisticated it tells time.

First, see this luxury watch as a piece of jewelry well put together to enchant top collectors.

Its body is a flawless cluster of well-put shiny diamonds of different colors and shapes, housing a pavé-set watch face, the actual timekeeper.

Though the watch face isn’t exposed to every glance, it is revealed when you press a spring-built mechanism. The three-heart-shaped stones open like a flower petal to expose the watch face when pressed.

There is more to a mere timepiece than meets the eyes.

A timepiece should tell the time and meet the fashion needs of many people. However, to mega-wealthy individuals, the complication and arrays of glamorous stones matter more than just keeping time.

The Graff Diamonds The Fascination is multi-functional, and doubling as a ring is one of its functions.

The stunning masterpiece is designed with a combination of 193.09 carats of white diamonds. Since it multi-functions both as a ring and a watch, the pear-shaped piece pulls off 38.13 carats of diamonds to function as a ring.

The company’s CEO, Francois Graff, is confident that the piece will find its way to Asia as their desire for unique pieces finely defines them.

While this piece might be engineered for someone who can spend $40 million to own it, there is a more fabulous piece put together with more care and precious stones, and it costs $55 million.

Priced at $55 million, the Graff Diamonds Hallucination is one of the world’s most expensive watches ever to be engineered.

This piece’s exorbitant price isn’t influenced by its core function but by the staggering weight of 110 carats guiding the face watch.

Ideally, you own a piece of jewelry that comes with a timekeeper.

According to Laurence Graff, the Chairman of Graff Diamonds, the idea of creating the record-setting watch was born from his passion for diamonds.

“For many years, I have thought about creating a truly great watch that illustrates our all-consuming passion for diamonds. The Hallucination has made my dream a reality.”

“The Graff Hallucination is a sculptural masterpiece, a celebration of the miracle of colored diamonds.”

The Most Expensive Patek Philippe Watch Ever Sold In The World

The bespoke luxury watchmaker Patek Philippe has uninterruptedly assembled high-end mechanical watches for a select audience. They have also had their masterpieces battled for at auction grounds since 1839.

The most expensive of the brand’s pieces to ever be sold at auction remains the Patek Philippe Grandmaster Chime 6300A-010 for $31.19m.

Meanwhile, some of their flagships have changed ownership for $11.14 million, as in the case of the Patek Philippe Stainless Steel 1518 and $23.98m for Patek Philippe Henry Graves Supercomplication.

The grandmaster, for a reason, the piece has 20 complications, with a unique feature – a chimed alarm function that hasn’t ever been made in a mechanical watch.

Other sophisticated features include a grand and petite sonnerie, a perpetual calendar with a year display, a leap-year indicator, etc.

Even when there are no words about the collector, we’re sure of one thing. It did set the mega-wealthy individual back by $31.19m.

Why we can’t assemble pieces for the sport of it, we have collected answers to some FAQs about the world’s most expensive watches.

What is the most selling watch?

The most expensive watch to ever be sold remains the Patek Philippe Grandmaster Chime 6300A-010 which sold for a whopping $31.19m in Geneva in 2019.

What are watches worth a lot of money?

At the time of writing, there is no timepiece valued more than the Graff Diamonds Hallucination at $55 million, holding the number one spot for the most valued watch.

The easily affordable everyday watches are all designed for specific classes, needs and functions, but statement pieces like the ones covered in this article are in a class of their own.

Others like the Hublot Big Bang Diamond and the Paul Newman Rolex Daytona watches are made with exquisite style and design.

They are assembled to be used as timekeepers and for mere showoffs. They are tailormade for collectors that love such attention, the 1% of the world’s population.

But for sure, these pieces will appeal to all watch lovers, even those who are less likely to care about million-dollar watches.

Suppose you think that the expensive watches in this article are overpriced and you want to spend less than a million dollars. In that case, you may opt for classical timepieces.

If you liked this article, you might want to read our other articles at EvesWatch.com.