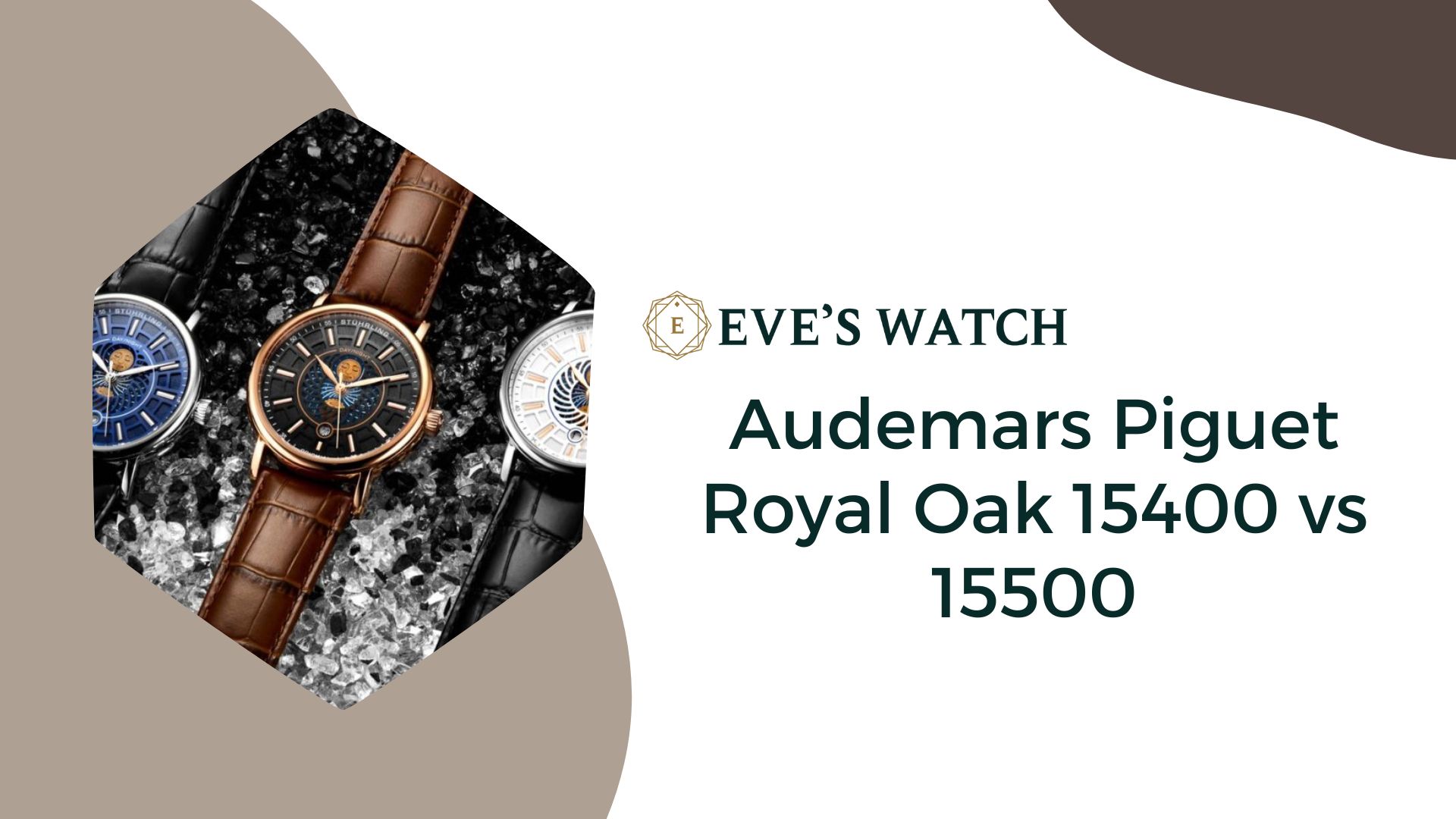 Audemars Piguet is a brand at the forefront of innovation, watchmaking, and luxury. They even created their timepieces to make you fall in love with timekeeping. And among its most notable models are from the Royal Oak collection: the Audemars Piguet Royal Oak 15400 Vs 15500.

These timepieces have become design icons, and their popularity reached beyond the circle of seasoned watch collectors. These models maintained popularity as technology advanced, and new releases emerged from other luxury brands.

In this post, we take a much closer look at the two models from the Royal Oak line. We’ll also explore their history, design, and movements to determine which is better. Let’s get started!

Visually, the defining characteristics of the AP Royal Oak 1500 are the display case back, cleaned-up dial (date window is now positioned at 3 o’clock), and the smaller yet thicker hour markers.

Additionally, the case size is the same (41mm), but the recent Ref. 15500 came with a new movement. The new 4302 caliber movement with an improved power reserve of 70 hours now beats 4Hz from the previous 3Hz.

The Royal Oak 14500 looks elegant but is better now with 1500l as they removed the word “Automatic” from the dial. You’ll notice that the minute track is now on the outer edge of the dial. Audemars Piguet’s guiding principle is visible in these two watches: focus on quality.

Audemars Piguet Royal Oak is as legendary as the quality and design themselves. In April 1972, Audemars Piguet’s boss Georges Golay gave the world a timepiece that would impact the world of horology. Fifty years later, AP remains one of the most desirable watches ever to grace the watchmaking world.

And we speak of the Royal Oak – an irrefutable watch icon that became an object of desire for the next generations.

The name Royal Oak came from the series of eight vessels of Britain’s Royal Navy, inspired by the ancient oak tree that saved King Charles II of England. He hid in it to escape the Roundheads following the 1651 Battle of Worcester.

Hence, Royal Oak watches have octagonal bezels, symbolizing the eight vessels. When they introduced the watch collection, people were curious why it was more expensive than the gold Patek Philippe and the Rolex Submariner.

And the answers were that the watches from the Royal Oak collection have precision for execution, sound design, and high-quality movement. Although there was no quick take-off for the product line, the quality and allure of the Royal Oak couldn’t be denied for long and soon became a massive success in the watch industry.

The RO 15400 has a see-through case-back that allows you to view the in-house 3120 self-winding movements comprising 280 components. It may not look unique at first glance, but it’s a movement with a stop-seconds function and an instant jumping date display.

You can also find this Swiss-made automatic movement used in 15400 in other AP models, including the Royal Oak Offshore, Jules Audemars Self-winding, and the Royal Oak Selfwinding. It beats 21,600 BPH, 3Hz per hour and has up to 60 hours of power reserve.

Meanwhile, the new 4302 caliber movement of the 15500 is bigger. The new movement has a power reserve of 70 hours and is more robust in construction. Furthermore, the Royal Oak 15500 features a frequency of 28800, 32 jewels, and with date function.

The Royal Oak ref. 15400 was sized at 41mm, similar to the 15500. Both models’ overall Royal Oak design is unique compared to other luxury brands. They have an excellent combination of sharp angular edges and brushed and polished surfaces.

Both Audemars Piguet Royal Oak watch models have the Grande Tapisserie pattern (or the Bleu Nuit, Nuage 50) on the dial. That shade of blue was obtained by submerging each dial in a galvanic bath of a particular formulation at a specific temperature and time to get that specific color. They also applied a thick layer of varnish with a few drops of black (n° 50) to the dial for an extra layer of protection.

You can also opt for the gray, blue, or black dial. The polished steel and luxurious look give these sports watch a classic appeal.

The difference is in the date window. You’ll notice in 15500 that the date window is moved to the 3 o’clock position, eliminating the small baton at 3 o’clock. It gave the watch a cleaner look.

And although it remains an automatic Royal Oak, they also removed that text from the dial. That clean look is what that purists have been hoping for since the release of the 15400. Another update to the basic Royal Oak is the case thickness, which has been increased from 9.8mm to 10.4mm. There are no drastic changes in terms of look aside from these.

The two watches feature a full steel case and bracelet. To some people, this material may feel a little heavy on the wrist when worn for an extended period. Don’t worry, as you can quickly remedy this by changing the bracelet to Audemars Piguet’s leather or rubber straps.

The Royal Oak hands feature a luminescent coating; both are water resistant for up to 50m, which can withstand cold showers and swimming. Hot showers are different because they may allow the timepiece to expand, potentially allowing the water to get in.

They also have the best lugs on a watch and good finishing detail. So, in terms of overall durability, you can wear the timepiece almost daily. The watch still looks excellent for traveling, partying, swimming, office, and many more.

First, AP is a prestigious watchmaker. Second, it doesn’t manufacture as many timepieces per year as Rolex. Third, the brand focuses on quality, which means exclusive prices. The brand likewise develops movements in the truest sense of the word. Audemars Piguet produces all of its calibers.

Related: How Much Do The Most Popular Watches Sell For?

Who Is It Best For?

Audemars Piguet watches are best for the free-spirited, creative thinkers, people who value attention to detail, are determined, successful, and possess a refined demeanor.

And since the two timepieces are collectible, they’re also up for grabs for the watch collectors. They won’t be disappointed as the impact and history of these models are fascinating even to this day.

What Do People Say About It?

Watch Eric say, “The 15400 is an iconic watch. [When it was] released in 2012, it was a hit… It’s a well-balanced watch. It had a very nice layout in the dial with simple and traditional indicators.

The new Royal Oak 15500 has that same basic look [as the 15400], but it’s a little thicker. There are subtle changes in the dial layout. The ‘automatic’ written on the dial is no longer there anymore, [giving] the watch a cleaner look.”

In a Reddit poll questioning which of the two Royal Oak models is better, the reference 15400 got higher votes than the 15500. One Reddit user commented, “[I choose the 15] 400 for sure. I prefer [its] date position and slightly longer sticks.

When asked which one they like better and why, one answered, “It’s] the new movement [of] 15500 for me. The dial is a bit empty, but not enough to bother me.

Another narrates the reasons he voted for the RO 15500. These include the new movement, the minute markers are easier to read, hour markers are more proportionate to the watch dial, and the date window of 15500 is more prominent and goes all the way to the edge.

The Verdict: Which One Should I Buy?

Audemars Piguet Royal Oak 15400 and 15500 offer reliable movement and are visually appealing on the wrist.

But if you’re looking for an elegant watch and still feel connected to the Audemars Piguet brand’s history, the Royal Oak 15400 may be the ideal option. Meanwhile, if you prefer the best Royal Oak watch with an updated movement, choose the more recent Ref. 15500.

I like the updated caliber, the shorter markers, the cleaner dial, the new date font, and the shifting of the date window of the Royal Oak 1550. Eventually, whatever choice you make, both watch models are worth it.